Wolfram Alderson, MS is a lifelong social change agent who has worked on various fronts of social change. A focus of his career has been food system change – involving decades of work developing, organizing and managing solutions to a broken food system that impacts the inner-city poor, but affects the health and well-being of the entire population farmers, consumers, communities, and cities. These solutions have included farmers’ markets, urban agriculture (community farms), school gardens, and more. 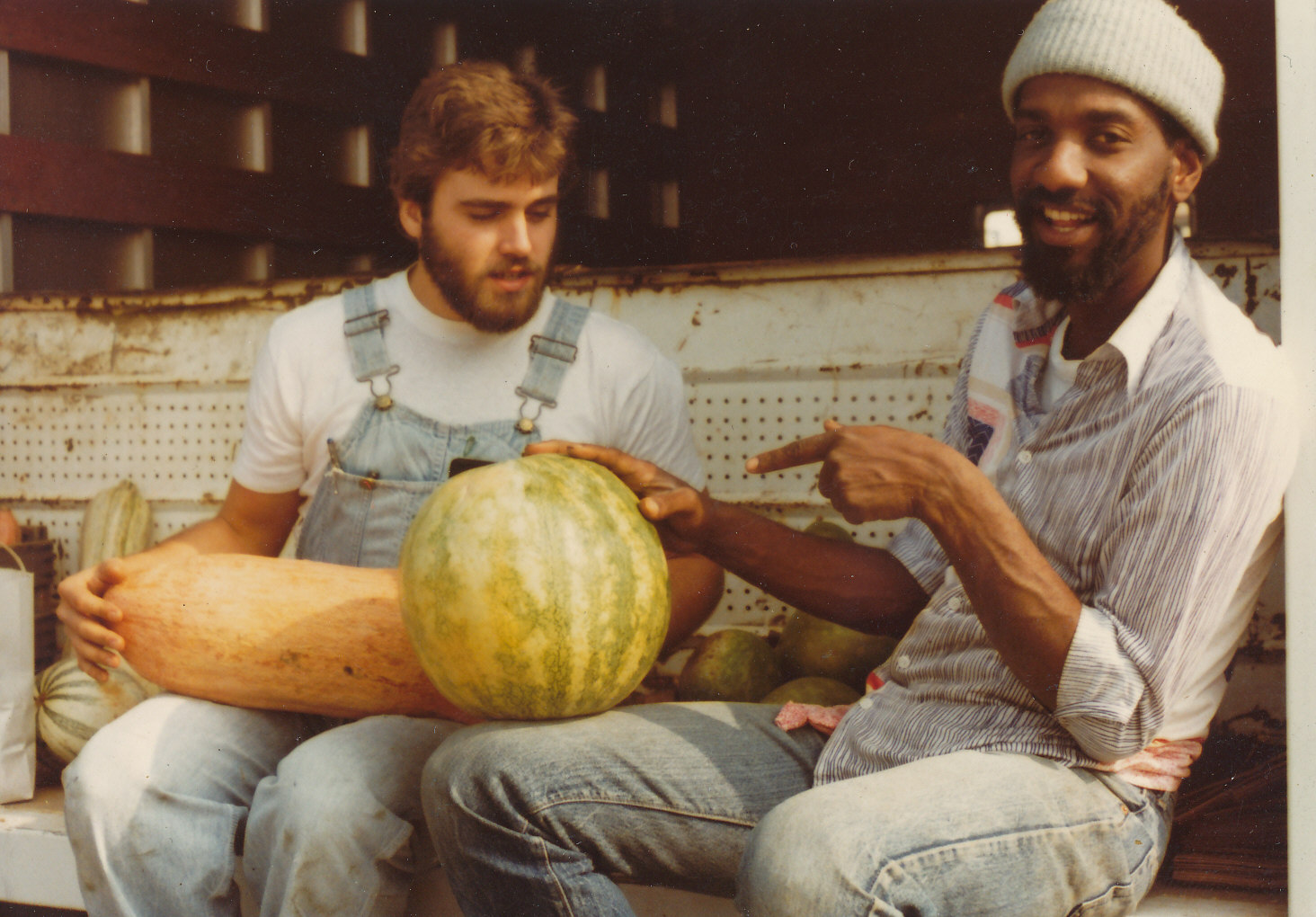 Wolfram Alderson (left in photo above) with melon farmer at the Gardena Farmers’s Market in 1979.

Wolfram’s passion for food security extends across decades of work advocating for the under-served and he is a pioneer in the movement for a more equitable and healthy food system. I appreciate Wolfram’s collaborative spirit and his advanced skills in creating social impact, forging creative strategies for online education, building community, and establishing productive partnerships. 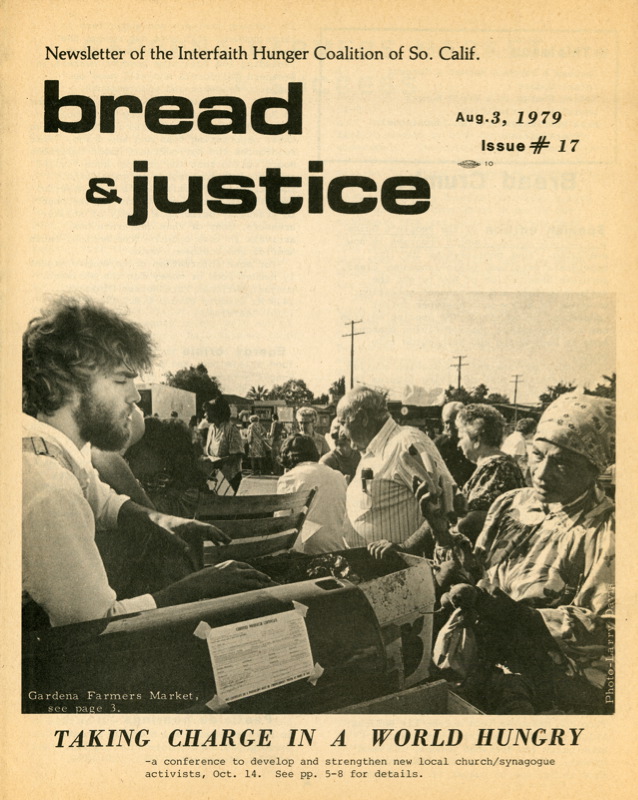 “At the age of 19 years old, my social service career got off to a wonderful start when I was given the opportunity to organize the first farmers’ markets in Los Angeles, all in low-income communities. I enjoyed the challenge and opportunity to work with dozens of community leaders and organizations, politicians, faith leaders, and government officials, and organized one of the first certified farmers’ markets in California, which opened in Gardena in 1979.” – Wolfram Alderson 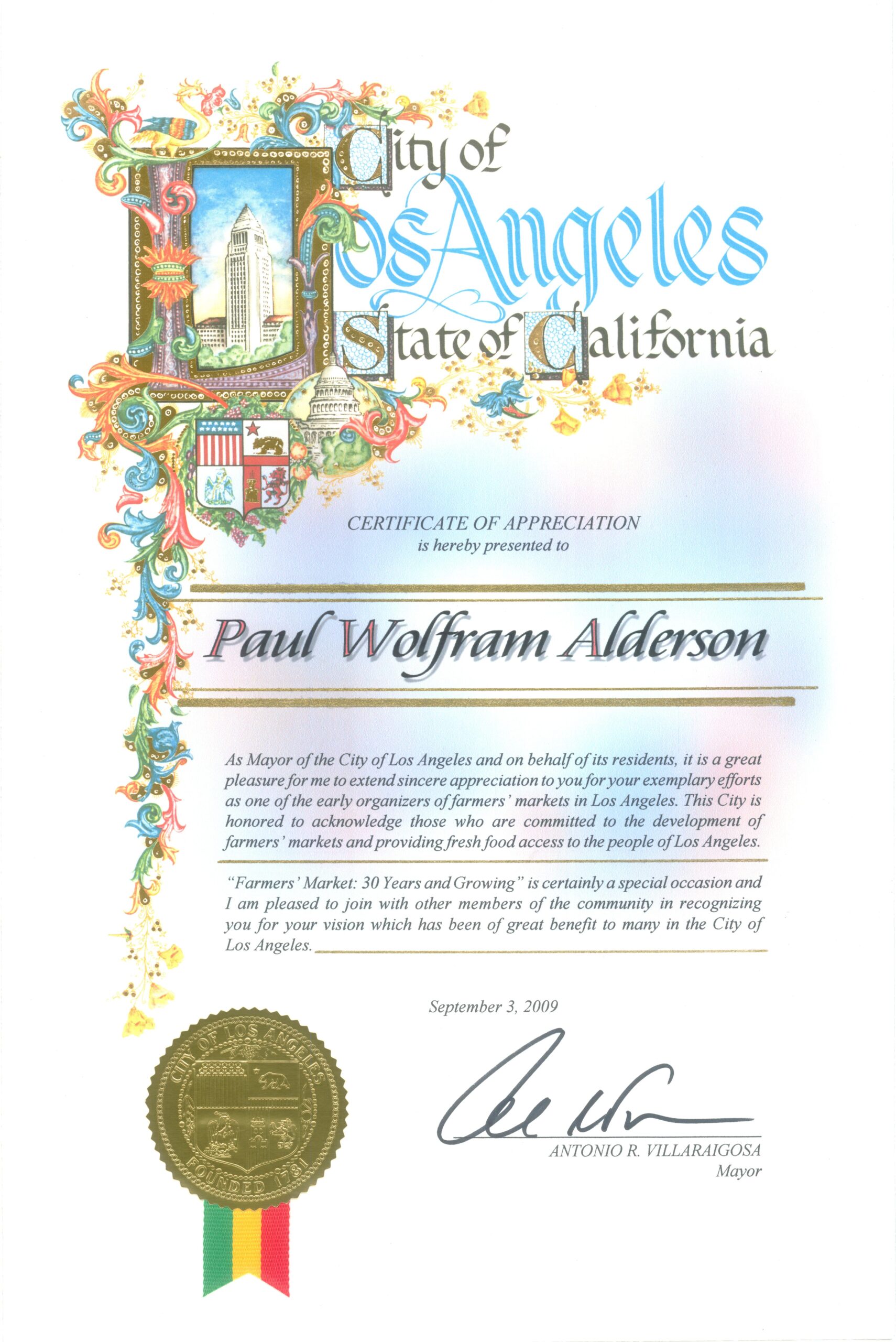 September 3, 2009 Award given at the 30th anniversary of L.A.’s first farmers’ market (Gardena Farmers’ Market, founded in 1979). The “Farmers’ Markets: 30 Years and Growing” event honored the early farmers’ market founders and farmers and commemorated fresh food access in the City of Los Angeles with a press conference and a festive expansion of the existing farmers’ market on City Hall’s south lawn. The City hosted this event to honor farmers’ market pioneers.

I was 19 years old when I was hired as the first staff person for the Interfaith Hunger Coalition food security team (1979) to begin organizing farmers’ markets in the low income communities throughout the Los Angeles area. The market work continued for several years 1979-1982. I lead and managed the development of several markets, and assembled and managed a team that supported the development of markets. I was involved in market organizing projects in East L.A., South Central Los Angeles, Compton, Long Beach, Santa Monica, Pasadena, and Pacoima. My partner and colleague in the beginning days was Vance Corum. His work was so critical in terms of organizing the farmer base that supported so many new markets we were organizing in the L.A. area. He made a life long career of farmers’ markets and even co-wrote a book on the subject. I also had the pleasure of working with Mark Wall, who also continues to this day organizing and managing farmers’ markets.

Our organizing efforts and the movement was about establishing multiple markets throughout the L.A. region and developing a team of organizers (under the Hunger Organizing Team – funded by a federal grant, and led by Mike Fonte and Pat Reif) that could support that—and then following up with L.A.’s first regional Urban Agriculture project that supported the new markets with community based food production. (I ultimately put 22 acres into urban agriculture cultivation around the Los Angeles area.)

My initial efforts in Gardena (including serving as the first market manager at Gardena) were followed up with several years of hard work (1979 through 1982) and leadership that supported many markets coming into existence. I think Gardena, Santa Monica, Long Beach, Pasadena, Pacoima, and Adams & Vermont are the only markets I was involved with then that have survived to the present.

In later years, I was a founder of the Claremont Farmers’ Market (that my adopted-son Oscar De Leon now manages this market and others) and more recently the East Palo Alto Farmers’ Market—a project of Collective Roots, of which I was Executive Director. I have also been a Certified Producer within several projects (Cuban Refugee Program, Casa Colina Horticulture Therapy Program, and Collective Roots).

I was fortunate to be at ground zero of the farmers’ market movement in California and serve as one of the first full-time organizers of farmers’ markets back in 1979. The first markets were all organized in low income communities. This is where we saw the greatest need decades ago, and today, this is where the greatest need remains. Now we may have now use exotic lingo like “foodsheds,” “food deserts” and “food system change.” But, despite our evolving awareness and lexicon, and despite enormous progress, our evolution of knowledge about the food system has not put an end to the dysfunction that continues to foster hunger, malnutrition, disease, and profound levels of health disparities today. We still have much work to do.

In today’s world, it is more challenging than ever to bring solutions like certified farmers’ markets to low-income communities. Farmers markets, now popular in so many communities are generally no longer associated with bargain prices, despite eliminating the middlemen from the equation. Food system change advocates use catchy phrases and talk about “slow food” and “100 mile diets,” and urge us all to eat local and eat fresh, when there are typically communities within those 100 miles that suffer from a profound lack of food access. The headlines about the food system focus on the haves versus the have-nots. The headlines leave out the people who simply need “real food” and “healthy food” regardless of where it comes from or how fast it takes to prepare it.

Ideologically, our ideas about food and foodsheds must evolve so that the most vulnerable among us are not left out of the important changes we are making happen. One of the most important ideas about the food system is that OUR FOOD SYSTEM CONNECTS ALL OF US. The food system change movement must retain a strong sense of social-justice and avoid elitism, regardless of whether it is intentional or not.

Wolfram was (and continues to be) an important person doing key work to change the food system. I worked with him, years ago, when he was the with the IHC which helped to create the environment for the tremendous growth of farmers markets in Southern California. He is a knowledgeable and enthusiastic innovator, practical and smart in his work.

Working with Wolfram on the first certified farmers’ market in Southern California, I found an energetic, creative, hard-working individual who cared deeply about people and the programs that affect them. I have always seen a spirit that leads to effective change at a systemic level.

Wolfram is a passionate, diligent colleague who is adept at facing problems and resolving them. He was one of the driving forces behind the establishment of the East Palo Alto Farmers’ Market, a community-based farmers’ market in a low-income city in San Mateo County. Wolfram has many innovative ideas that he is able to implement because he is a successful grant writer and advocate for sustainable food systems. It has been a pleasure working with Wolfram over the past few years and I strongly recommend him. 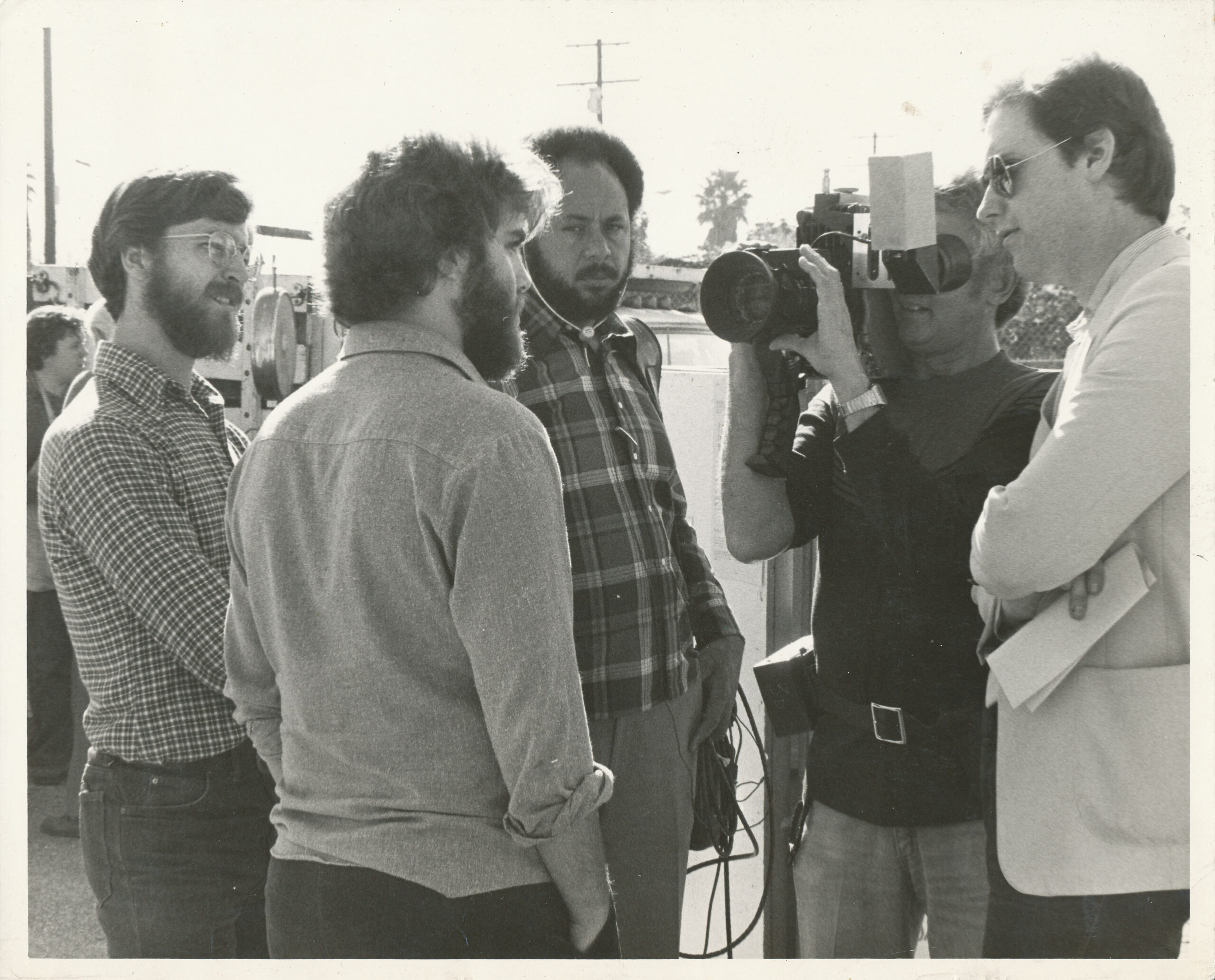 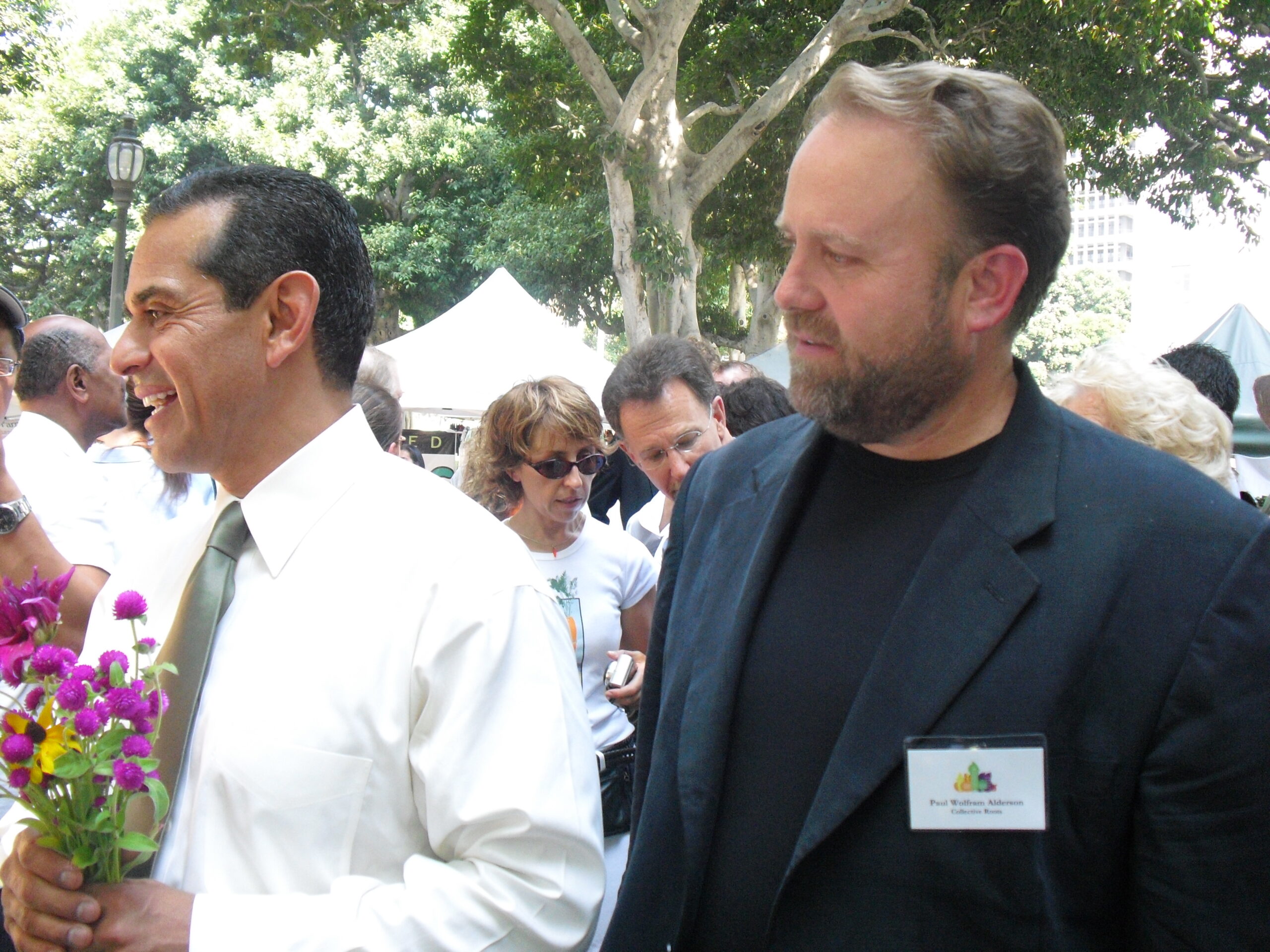 Hard to imagine that I would be standing next to the Mayor 30 years after organizing the first Certified Farmers’ Market in Los Angeles, celebrating the fact that Los Angeles has more farmers’ markets than any other city in the world (over 60 markets in the Los Angeles area and growing!.

At the core, Perfact’s patented recommendation engine takes criteria combining any number of ingredients, nutrients, recommendations, or warnings from any number of sources and boils them down to a personalized yes/no instantly. If a product doesn’t match all criteria, the engine makes recommendations that do. This innovative start-up, while still in stealth mode, is already working for change in the food system. Email wolfram@perfact.co for more information. 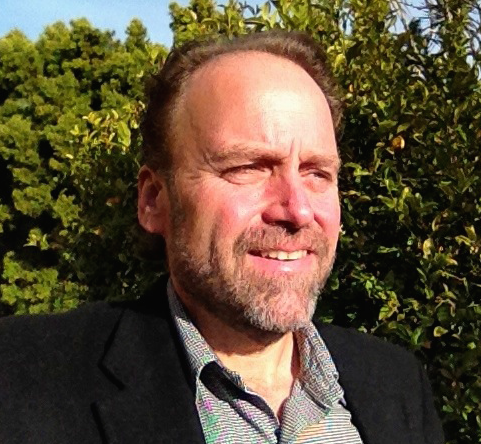